PSNews - On the occasion of the 45th anniversary of diplomatic ties between Vietnam and France, "Sai Gon", a play that was highly appreciated at the Avignon Festival in France will be held in HCMC from September 21-22, with the performance of 11 actors who are French, Vietnamese-French and Vietnamese.

“Sai Gon” by Caroline Guiela Nguyen  is a polyphonic symphony, telling a story that spanned 40 years of French and Vietnamese people whose destinies were tossed about by history.

The play is set in a Vietnamese restaurant called Saigon in Sai Gon (now HCM City) in 1956, when the last French person left Vietnam, and in Paris in 1996, when the Vietnamese Prime Minister issued a decision on repatriation of overseas Vietnamese.

The characters of the play go to the restaurant not only to eat but also to share their stories including a story of a French soldier falling in love with a Vietnamese woman, then taking her back to France with him; a story of a separated couple, and a tale of a French son and his Vietnamese mother.

The performance features 11 actors who are French, Vietnamese-French and Vietnamese, including professional actors and students of HCM City University of Theatre and Cinematography, such as Pierric Plathier, Nguyen Thi My Chau, Tran Nghia Anh and Hoang Thi Truc Ly. 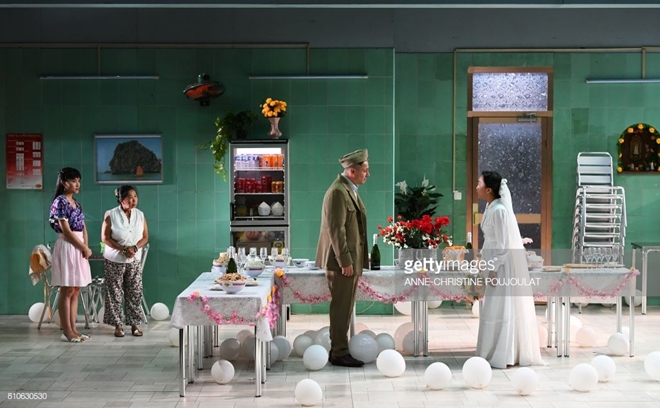 To write the play, she went to Ho Chi Minh City in 2015 and 2016 as part of the Villa Saigon residency programme by Institutfrançais du Vietnam to immerse herself in the city.

Last July, "Sai Gon" premiered at the Avignon Festival in France, an annual contemporary performing arts event and received praise from audiences and critics. After its wild success at the 71st Avignon Festival, the “Sai Gon” performances are all sold-out, one after another, in renowned theatres around the world.

It will be presented in both Vietnamese and French, and there will also be French and Vietnamese subtitles at Ben Thanh Theather on September 21 and 22.

Caroline, whose mother is Vietnamese studied directing at the school of the National Theatre of Strasbourg in 2005 after studying sociology and performing arts. In 2009, she co-founded the company Les Hommes Approximatifs with her partners.

Caroline is associated with the Odéon-Théâtre de l’Europe and with MC2: Grenoble, and is part of the artistic collective of the Comédie de Valence, the Centre Dramatique National Drôme-Ardèche.

Germany provides Vietnam with over 800,000 doses of COVID-19 vaccine

Positive signs of Vietnamese wood exports to US

A sweet delicacy from Nam Dinh

Hanoi allows takeaways and other services in safe areas

President Phuc’s trip to Cuba, US to promote vaccine diplomacy