The Vietnamese Government has paid considerable attention to Samsung’s investment projects in Vietnam and will continue to create favorable conditions for the firm to successfully do business in the country, Prime Minister Nguyen Xuan Phuc told an official from Samsung on January 11. 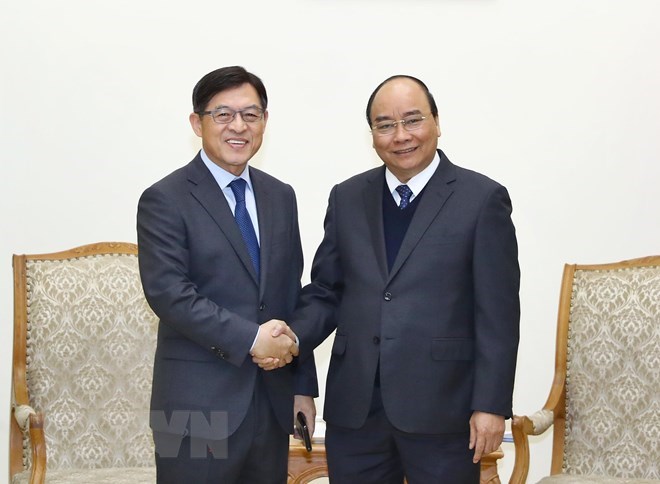 During a reception in Hanoi for Shim Won-hwan, Chairman and General Director of Samsung Electronics Co., Ltd., of the Republic of Korea (RoK), PM Phuc expressed his hope that the firm will continue with commitments to expanding its production activities in Vietnam in the time to come.

He highly appreciated the success of Samsung Vietnam in many aspects, including revenue, export turnover, and job creation, saying that it contributes to promoting the friendship between the two countries.

As former General Director of Samsung Vietnam, Shim Won-hwan said he is impressed with Vietnam’s economic growth, attributing the result to the Vietnamese Government’s sturdy direction.

Samsung is happy to have contributed to that growth, he said, expressing his gratitude for support from the Government and Prime Minister of Vietnam during his tenure in Vietnam.He affirmed that Samsung has long considered Vietnam an important strategic production centre in its global strategy, adding that the firm pledges to expand its long-term investment in Vietnam.

Shim cited that the production and business results of the Samsung Vietnam Complex have exhibited the most impressive growth among Samsung’s overseas production facilities. This is a strong testament for the group’s commitment to the Vietnamese Government, he said.

Samsung also promotes investment activities in Vietnam, including a research and development (R&D) centre, he said, noting that the group is also boosting the transfer of leading technologies to this centre.

The form is working with ministries and sectors of the RoK on proposals for the Vietnamese side, the official stated, expressing his hope that the Government of Vietnam will continue supporting Samsung in the work.

Newly appointed General Director of Samsung Vietnam Choi Joo-ho promised to make every efforts to contribute to Vietnam’s development. PM Phuc said he believes Choi will garner further success in his position in the time ahead.

The Vietnamese Government wishes that Samsung Vietnam will gain even more impressive achievements in its business in Vietnam, the Government leader said, suggesting the firm make Vietnam its top global production centre.

The Government of Vietnam is committed to ensuring macroeconomic stability and improving the business and investment environment, thus facilitating the operation of foreign investors, including Samsung, he stated.

Online exhibitions for children kicked off