Prime Minister Pham Minh Chinh held a reception for Cuban Ambassador Orlando Nicolás Hernández Guillén in Hanoi on July 29, during which the host underlined Vietnam’s great attention to the close-knit friendship with Cuba. 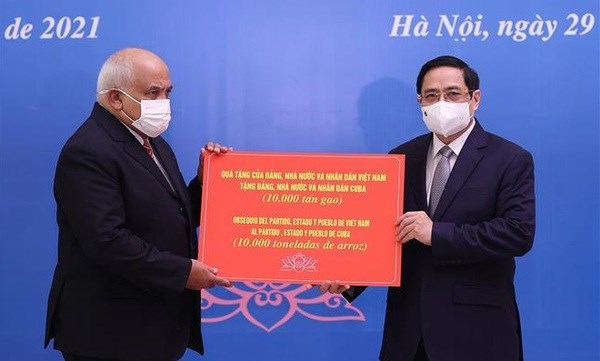 In recent years, Vietnamese and Cuban ministries and sectors have joined hands together to overcome difficulties brought by the COVID-19 pandemic, while reinforcing and developing cooperation in all fields, noted the PM.

The two sides recalled the fruitful outcomes of telephone talks between Party General Secretary Nguyen Phu Trong and First Secretary of the Communist Party of Cuba Central Committee and President of Cuba Miguel Díaz-Canel Bermudez on May 5 and July 27, as well as talks between PM Chinh and his Cuban counterpart Manuel Marrero Cruz on July 1.

On the basis of high-level agreements between the two countries, PM Chinh asked Ambassador Orlando Nicolás Hernández Guillén to coordinate with ministries, sectors and agencies of both sides to effectively implement orientations and measures to strengthen the traditional solidarity and friendship and comprehensive cooperation between the two countries.

He underlined the significance of bilateral cooperation and experience sharing in clinical trials, licencing and transferring of Cuba’s COVID-19 vaccine production technology in Vietnam following agreements reached in the recent talks between the Vietnamese and Cuban PMs. 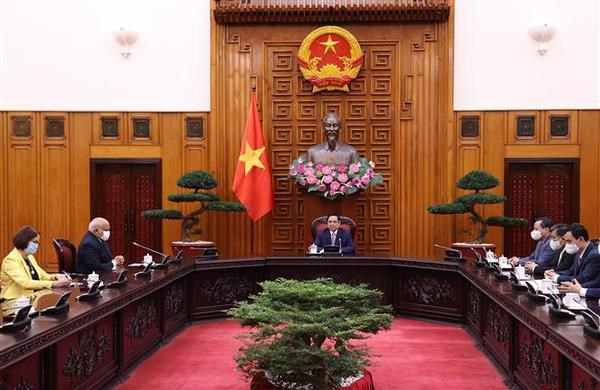 At the reception hosted by PM Pham Minh Chinh for Cuban Ambassador Orlando Nicolás Hernández Guillén (Photo: VNA)
On the occasion, PM Chinh announced that Vietnam will present Cuba 10,000 tonnes of rice, while Hanoi also offers Havana 2,000 tonnes of rice with a hope of easing difficulties facing Cuban people amid the COVID-19 pandemic.

He added that Vietnam will ship the rice to Cuba as soon as possible, expressing his hope that the two sides will continue to strengthen cooperation to ensure food security for Cuba.

For his part, Ambassador Orlando Nicolás Hernández Guillén thanked the Party, State and people of Vietnam for the support, which reflects the special traditional friendship between the two countries.

He pledged to work hard to make more contributions to the reinforcement of the special traditional friendship, fraternal solidarity and and comprehensive cooperation as well as mutual trust between the two Parties, States, Governments and peoples, especially in hard time.

He vowed to coordinate closely with relevant agencies of both sides to promote bilateral cooperation in COVID-19 vaccine production in Vietnam.

Mountainous areas cut off by flooding in the central region

Quang Ninh planning to welcome tourists from other provinces

Vietnam set to fully reopen to foreign visitors by June 2022