A detachment of Vietnamese naval vessels took part in a parade celebrating the Russian Navy Day in Vladivostok city on July 25. 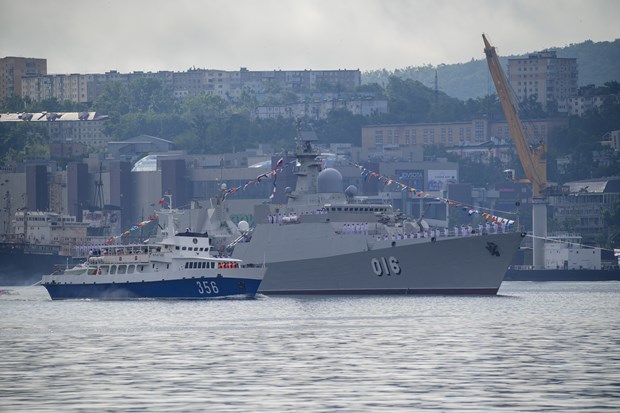 Moscow (VNA) – A detachment of Vietnamese naval vessels took part in a parade celebrating the Russian Navy Day in Vladivostok city on July 25.

The detachment consists of Vessel 015-Tran Hung Dao and 016-Quang Trung from Brigade 162 of Vietnam’s Naval Region 4, along with a delegation led by Deputy Commander of Naval Region 4 Col. Trinh Xuan Tung.

This is the second time the Vietnamese navy has sent vessels to join a Russian Navy Day parade.

The first time was in 2019, when 016-Quang Trung and a delegation from the Vietnamese navy took part in a parade also in Vladivostok. Admiral Sergei Avakyants then expressed his hope that the Vietnamese navy would send vessels to visit the Pacific Fleet annually.

The active and responsible participation by the naval vessels of Vietnam in the parade helped affirm the Ministry of National Defence and the Vietnam People’s Navy’s support for international events held by their Russian counterparts. It was also meant to acknowledge the Russian navy’s support for the activities organised by the Vietnamese navy in 2020, when Vietnam held the ASEAN Chairmanship.

Other parades marking the Navy Day have also been held in other port cities of Russia on July 25.