vThe Department of Water Resources Management under the Ministry of Natural Resources and Environment has warned localities in the Mekong Delta to prepare plans to cope with saltwater intrusion. 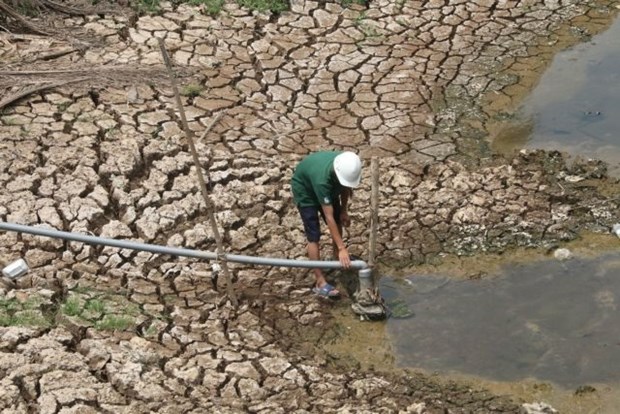 Farmers in Mekong Delta are facing a shortage of clean water due to the low water level of the Mekong River. (Photo: VNA)

Ho Chi Minh City (VNS/VNA) — The Department of Water Resources Management under the Ministry of Natural Resources and Environment has warned localities in the Mekong Delta to prepare plans to cope with saltwater intrusion.

The Mekong River has fallen to "abnormal" levels, threatening the livelihoods of 60 million people living along its lower course.

The drop was partly caused by restriction on water flows from the upper reach of the river from January 5 to 24, which dropped to 800cu.m per sec. The normal level is 1,400cu.m per sec.

According to the Southern Institute of Irrigation Science, the drop in water level in the upper Mekong River for 20 consecutive days in January lowered water levels and allowed saltwater intrusion in Delta provinces.

According to the department, saltwater intrusion will continue to affect the area until the end of March.

Local authorities in the Delta have begun taking measures to cope with the effects of saltwater intrusion.

Many households in these areas are using water pots, cement containers and other receptacles to store fresh water for household use.

In An Giang province, irrigation canals have been dredged and sluices upgraded to store fresh water.

The provinces in coastal areas have upgraded irrigation systems to protect crops and aquaculture.

Farmers have been encouraged to use advanced farming techniques to cope with the shortage of fresh water.

To store fresh water, the Tra Vinh province People’s Committee has decided to dredge 10 irrigation canals at a total cost of 69 billion VND (3 million USD). Sea dykes, embankments and other infrastructure will also be inspected and repaired.

In recent years, the delta, the country’s largest rice, fruit and seafood producer, has faced severe saltwater intrusion from the sea./.