International scholars taking part in a July 9 webinar highlighted the significance of the 1982 United Nations Convention on the Law of the Sea (UNCLOS) and the Permanent Court of Arbitration (PCA)’s ruling in the settlement of the East Sea issue. 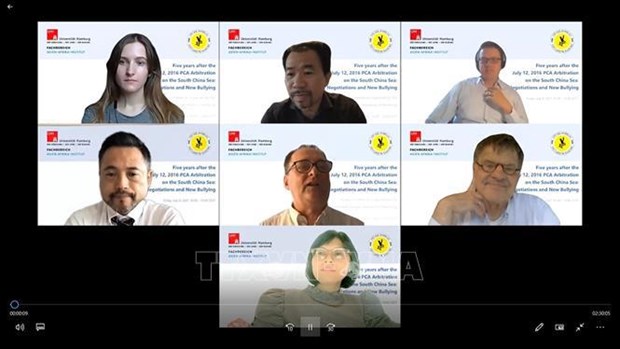 Participants in the webinar on July 9 (Photo: VNA)

The fourth workshop on the East Sea, internationally known as the South China Sea, was held by the Asia - Africa Institute at the Hamburg University of Germany on the occasion of the five years since the PCA, based in The Hague (the Netherlands), issued a verdict relevant to the waters on July 12, 2016.

Prof. Thomas Engelbert from the Hamburg University noted since the ruling issuance, the situation in the East Sea has continued to witness tense developments with continuous violations of international law, prompting many countries to voice objections.

Meanwhile, negotiations on a code of conduct in the East Sea (COC) between the Association of Southeast Asian Nations (ASEAN) and China have yet to finish, he pointed out.

Earlier this year, Japan sent a diplomatic note to the UN to reject China’ claims of sovereignty in the East Sea. Others like the US, the UK, France, Germany, Australia, New Zealand, Indonesia, Malaysia, the Philippines, and Vietnam have also released statements about the tense developments in this body of waters. All of them hope that the East Sea will be safe, stable and have the freedom of navigation guaranteed.

The international community has also stressed the importance of complying with international law while strongly protesting against the infringements of UNCLOS as well as the refusal to adhere to the PCA ruling, according to Engelbert. 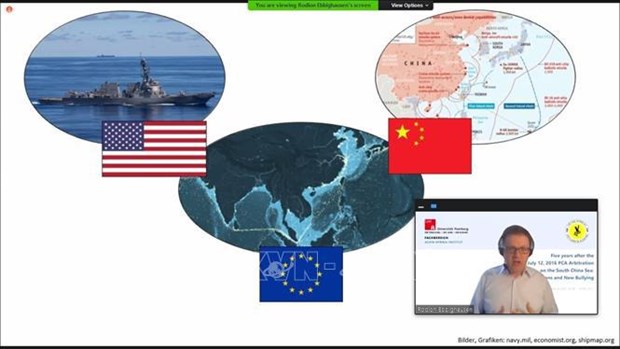 Prof. Suzette Suarez from the Bremen University of Applied Sciences described the PCA ruling as a legal document with high international value and an important role in resolving disputes and demarcating the outer limits of the continental shelf in the East Sea, which is a binding and compulsory procedure under UNCLOS.

Based on international law and the PCA verdict, China’s “nine-dash line” claim and other claims of sovereignty in the East Sea are completely void, she said.

Echoing the view, other experts at the webinar also highly valued the 2016 ruling by the PCA, which they said is an important legal basis for handling the East Sea issue, and that all the parties concerned need to respect international law and refrain from making actions that complicate the situation.

Talking about Europe’s role in the East Sea issue settlement, journalist Rodion Ebbighausen from Germany’s Deutsche Welle TV channel said recently, France, Germany, and the Netherlands have issued their national strategies on the Indo-Pacific. In April this year, the European Council issued the EU Strategy for Cooperation in the Indo-Pacific.

All of these documents mentioned the East Sea and emphasised the role of international law, especially UNCLOS, he said, adding that the EU’s viewpoint is pursuing a multilateral and inclusive approach to the settlement of this issue, including the use of peaceful means on the basis of international law.