The 15th National Assembly’s first session wrapped up in Hanoi on July 28 after nine days of sitting, three days earlier than schedule. 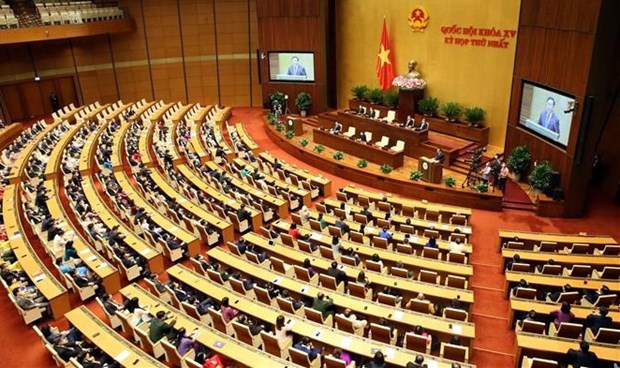 At a session of the 15th National Assembly (Photo: VNA)

The legislature decided to add the issue of COVID-19 prevention and control to the session’s Resolution, creating a legal foundation for the Government and Prime Minister to more actively and flexibly direct the pandemic fight.

At the meeting, General Secretary of the Communist Party of Vietnam Central Committee Nguyen Phu Trong delivered a speech to the legislature, which highlighted orientations to help the NA continue renewing and improving the efficiency and effectiveness of its activities.

The NA issued 29 Resolutions, including 17 resolutions on organisation and personnel, 11 thematic resolutions, and one general resolution on the first session. They also considered reports reviewing the implementation of plans and measures.

The legislature affirmed that under the leadership of the Politburo and the Party Central Committee’s Secretariat and the directions of the NA and relevant units, the elections of deputies to the 15th NA and People’s Councils at all levels for the 2021-2026 tenure have been a success.

Lawmakers decided on the number of the members of the NA Standing Committee, organisation structure of the Government and the number of Cabinet members.

They also elected and approved the appointment of 50 high-ranking State leaders and four Judges of the Supreme People’s Court.

Amid the complicated developments of the pandemic, the NA asked the Government, PM, ministries, agencies and localities to actively grasp realities, continue adopting more drastic and effective measures to control the outbreak, cut the costs of conferences and domestic and foreign working trips by ministries, agencies and localities by at least a half, and save this year’s regular spending by additional 10 percent./.

Taliban delegation meets with US diplomats in Qatar

PM holds phone talks with US Presidential Envoy for Climate