Prime Minister Nguyen Xuan Phuc met world leaders on the sidelines of the G20 Summit in Osaka on June 29.

At his meeting with Russian President Vladimir Putin, the two leaders agreed to accelerate the implementation of agreements signed during high-level official visits between the two countries, particularly the Russia trip this June, thus boosting the bilateral comprehensive strategic partnership in a substantive, deeper and effective manner, especially in the fields of energy, oil and gas, and high tech. 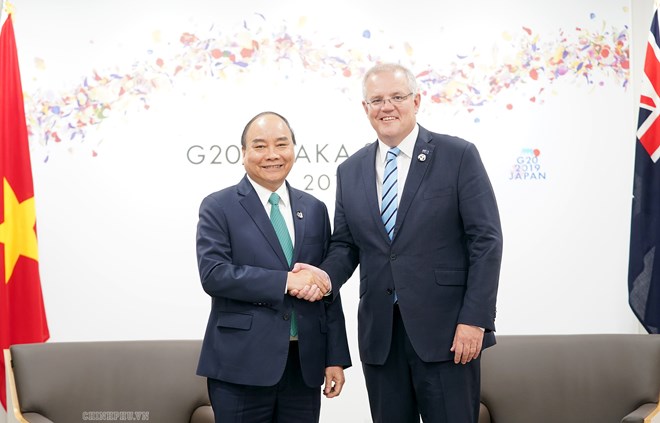 He expressed his support for Vietnam’s performance as ASEAN Chair in 2020 and wished to further enhance ties with ASEAN within the ASEAN plus one mechanism.

PM Morrison agreed with PM Phuc’s proposal on close coordination in implementing the Comprehensive Progressive Agreement for Trans-Pacific Partnership (CPTPP) as well as accelerating the early conclusion of negotiations on the Regional Comprehensive Economic Partnership (RCEP).

The two leaders shared views on international and regional issues of common concern, including the maintenance of peace, stability, freedom of navigation and aviation in the region.

At the meeting with German Prime Minister Angela Merkel who appreciated effective exchange activities on measures to boost the strategic partnership between Vietnam and Germany, the two leaders affirmed their commitments to continuing to carry out solutions to enhance the bilateral partnership in a more extensive and substantive manner in the time ahead.

In a talk with President of the Republic of Korea Moon Jae-in, the two sides agreed to take measures to boost bilateral ties and coordination in regional and international of shared concern, including the denuclearisation on the Korean peninsula.

President of the Asian Development Bank (ADB) Takehiko Nakao spoke highly of the strong development of Vietnam’s economy which is expected to expand 7 percent this year, while considering the Southeast Asian nation a good example in sustainable development, socio-economic management, particularly public debt management and reduction.

He affirmed the ADB wants to promote cooperation with Vietnam, especially in loans for infrastructure and social development and structural reform, while proposing the two sides ink loan agreements in healthcare and human resources development worth 225 million USD. He revealed the ADB’s plan to provide Vietnam with 315 million USD in loans to carry out projects on enhancement of capacity for climate change adaptation and urban environment improvement in the 2019 fiscal year.

Secretary-General of the United Nations Antonio Guterres congratulated Vietnam on its election as a non-permanent member of the UN Security Council for 2020-2021 tenure, saying that the country will be an important factor contributing to the UN body’s activities. 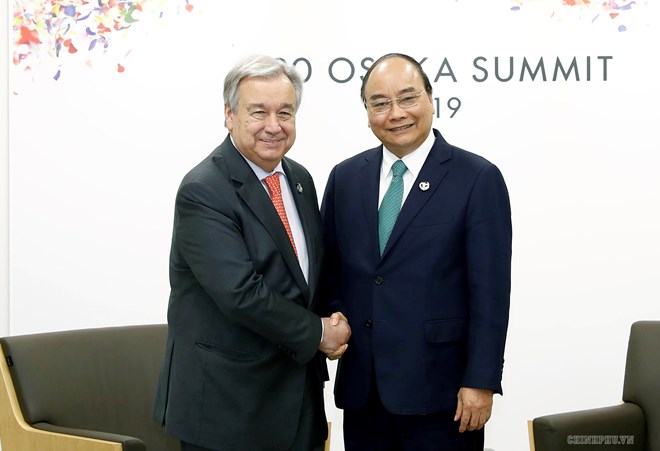 He appreciated Vietnam’s contributions to peace and stability in the world, including the continued deployment of peacekeeping forces to South Sudan, and affirmed his support for Vietnam to fulfil its roles at the UN.

The two sides discussed issues on security and development in the region and the world as well as measures to foster cooperation between the UN and ASEAN in 2020 when Vietnam assumes ASEAN Chair.

Prime Minister Nguyen Xuan Phuc took the opportunity to invite the UN Secretary General to visit Vietnam and attend related activities of ASEAN in 2020. The later accepted the invitation with pleasure.

Positive prospects for rubber exports to US in 2022