President Nguyen Xuan Phuc on January 11 asked the court and judicial sector to continue with reforms to adapt to the new situation and better meet requirements of national development.

Judicial reform offers a driving force to improve the quality and efficiency of courts, the President, who is also head of the Central Steering Committee for Judicial Reform, told a symposium in Hanoi.The judicial reform strategy should include specific orientations, targets, tasks and solutions, he said, suggesting that the focus should be paid on measures to remove difficulties in the reform.

He also urged new reform solutions by 2030 with a vision towards 2045, which, the leader said, need to match the country’s latest situation as well as the world’s development trend.Phuc stressed the need to make it easier for people to access justice, and give more power to courts in handling cases of violating interests of the public and the State.

The President pointed out other tasks like improving personnel quality, enhancing infrastructure and ensuring resources to build a professional, modern, effective court system.

He lauded judicial reform achievements, notably reconciliation and dialogues at courts, which have contributed to raising Vietnamese courts’ position, image and prestige.

Over the past time, the court system has stepped up the use of information-technology, expanded international cooperation and improved infrastructure, the leader said. 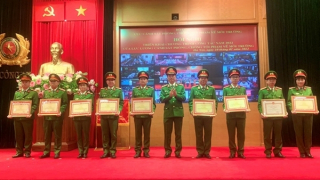