President Nguyen Xuan Phuc and Singaporean Prime Minister Lee Hsien Loong have express their delight at the development of the Vietnam-Singapore strategic partnership which is becoming increasingly substantive and effective across multiple fields.

During their meeting held on February 25, PM Loong emphasized that the positive results of President Phuc’s visit, coupled with important co-operation achievements in recent times between the two countries, will help add fresh impetus to consolidating and strengthening the joint strategic partnership.

President Phuc told his host that Vietnam always attaches great importance to and gives the highest priority to constantly consolidating and developing the strategic partnership with Singapore.

He went on to hail the remarkable progress achieved by the Government and people of Singapore over the past 55 years and expressed his belief that the city-island state will continue to thrive as it moves into the "new normal" and will soon achieve its goals of the “Green Plan 2030”.

The two leaders displayed their elation at the growing and effective strategic partnership across a variety of fields, with increasingly close political and diplomatic co-operation.

Economic co-operation between the two sides represents a bright spot in the region, with total bilateral trade turnover reaching US$8.3 billion in 2021, up 23.3% compared to 2020 despite facing many adverse impacts caused by the COVID-19 pandemic.

Singapore is the largest investor in both Vietnam and ASEAN and ranks second out of 140 countries and territories investing in Vietnam with a total registered FDI capital of US$66 billion.

The model of the Vietnam - Singapore Industrial Parks (VSIP) serves as a symbol of successful co-operation between the two countries, with a total registered investment capital of roughly US$19 billion, generating export value of about US$35 billion per year, and creating jobs for some 300,000 Vietnamese workers.

In the lead up to the 50th anniversary of both nations' diplomatic relations and the 10th anniversary of their strategic partnership in 2023, President Phuc and Prime Minister Loong exchanged and agreed on major orientations for promoting bilateral co-operation across several fields.

The two sides agreed to soon restore high-level visits and meetings, enhance defence and security co-operation, and implement bilateral co-operation mechanisms, especially the ministerial mechanism on connecting the two economies. This is in addition to accelerating the proper implementation of key areas of co-operation within the framework of the Vietnam - Singapore Economic Connectivity Agreement, such as investment, finance, information and communication technology, education and training, transport, trade, commerce, and services.

The two leaders consented to expand co-operation in the fields of innovation, digital transformation, the digital economy, along with green and sustainable development, thereby encouraging the connection of the two economies and moving them towards a new heights through a digital basis.

This will also serve to contribute to promoting the development of VSIP, with a focus on developing high-tech, smart, and environmentally friendly zones, as well as effectively taking full advantage of benefits from new-generation free trade agreements signed between the two countries such as the Comprehensive and Progressive Agreement for Trans-Pacific Partnership (CPTPP), and the Regional Comprehensive Economic Partnership (RCEP).

Appreciating the co-operation between the two countries in the field of COVID-19 prevention and control, the two leaders welcomed reaching an agreement on mutual recognition of vaccine certificates, thereby facilitating greater travel between both nations. This will serve to actively contribute to the post-pandemic recovery and socio-economic development of each country.

The two leaders also noted their satisfaction over the effective co-ordination between both sides at regional and international forums, therefore agreeing to continue co-ordination as a way of contributing to maintaining the solidarity and central role of ASEAN.

The two sides voiced their support for ASEAN's active role in helping Myanmar overcome its current crisis and speed up the implementation of the Five-Point Consensus agreed at the ASEAN Leaders' Meeting in Jakarta in April, 2021.

They also underlined the importance of maintaining peace, stability, security, safety, and freedom of navigation and overflight in the East Sea, not using or threatening to use force; peacefully solving disputes on the basis of international law, including the 1982 United Nations Convention on the Law of the Sea (UNCLOS), fully implementing the Declaration on the Conduct of Parties in the East Sea (DOC), and negotiating to reach a substantive and effective Code of Conduct (COC) in the waters in line with international law, including the UNCLOS.

As part of the occasion, President Phuc also conveyed greetings and an invitation to visit Vietnam by Prime Minister Pham Minh Chinh to Prime Minister Loong.

After the talks, President Phuc and Prime Minister Loong witnessed the exchange of five bilateral co-operation documents signed between government agencies of the two countries in the fields of defence, economy, trade, intellectual property, digital economic co-operation, and people-to-people exchanges. These documents will help to create an important framework for continuously consolidating and strengthening the Vietnam-Singapore strategic partnership. 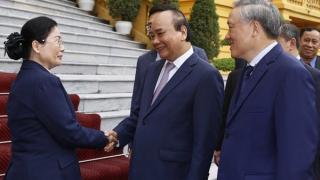 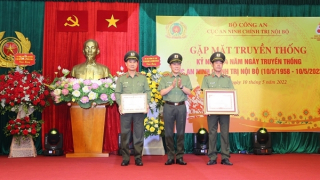 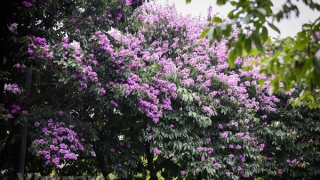 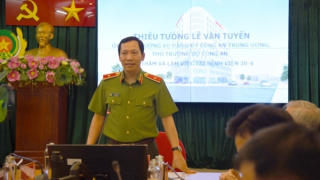 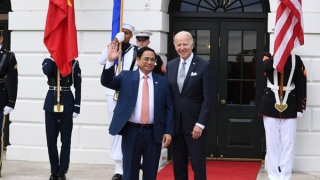 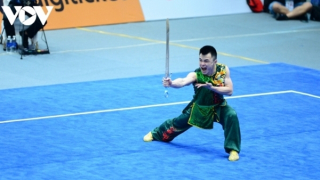 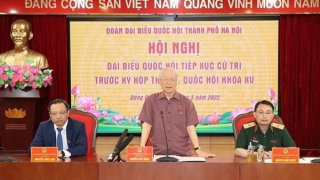 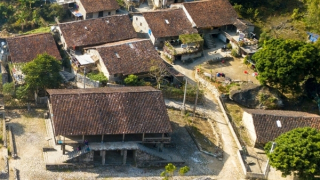 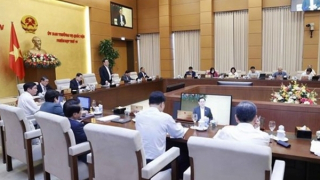 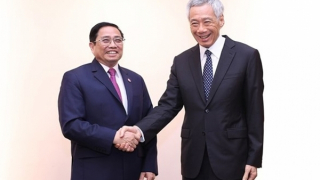