Vietnam attaches importance to developing ties with China and considers this as a leading priority in its foreign policy, Prime Minister Pham Minh Chinh told Chinese State Councillor and Minister of Foreign Affairs Wang Yi at their meeting in Hanoi on September 11. 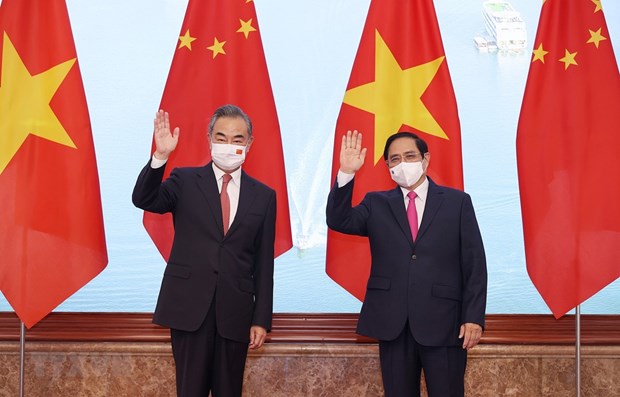 Hanoi (VNA) – Vietnam attaches importance to developing ties with China and considers this as a leading priority in its foreign policy, Prime Minister Pham Minh Chinh told Chinese State Councillor and Minister of Foreign Affairs Wang Yi at their meeting in Hanoi on September 11.

The host leader affirmed that the traditional friendship between Vietnam and China is a precious asset of the countries’ Parties, States, and peoples, and that the reinforcement of bilateral relations is an important factor for each country’s development and also a contribution to regional and global peace, cooperation, and development.

He expressed his belief that both sides will work together to effectively implement the common perceptions and agreements reached at the 13th meeting of the Vietnam - China Steering Committee for Bilateral Cooperation, maintain frequent contact between their senior leaders, and further promote exchange and cooperation mechanisms to enhance mutual understanding and trust, thus fostering relations between the two Parties and States in an increasingly substantive and effective manner.

With regard to cooperation in the COVID-19 fight, PM Chinh lauded the countries’ close coordination and mutual support since the pandemic broke out and thanked China for assisting Vietnam with vaccine via different forms, especially the provision of another 3 million vaccine doses announced during this trip by Wang.

He expressed his hope that China will continue supplying vaccine for Vietnam; transfer production technology for COVID-19 vaccine and treatment drugs; carry out COVID-19 vaccine purchase contracts to meet Vietnam’s demand, particularly in this September and October; share experience in disease treatment; and coordinate in controlling the pandemic in border areas. 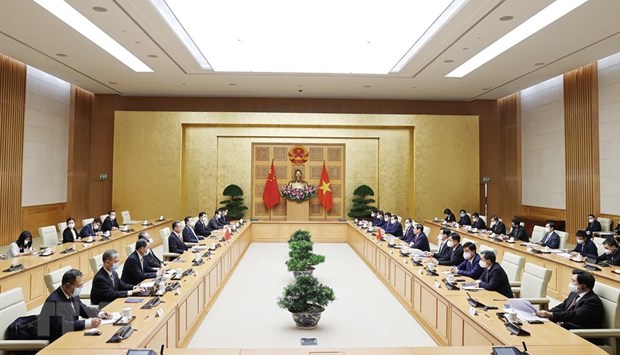 He also encouraged Chinese enterprises to invest in projects that match the two countries’ relations so that the people can enjoy the benefits from the substantive achievements of the bilateral friendship.

In terms of the East Sea issue, in a straightforward and constructive spirit, the PM stressed that both sides should instruct their law enforcement forces at sea to adhere to the high-level common perceptions and the Vietnam - China agreement on basic principles guiding the settlement of sea-related issues, strive to properly settle and control disputes well, maintain a peaceful and stable environment at sea; while working with ASEAN countries to seriously implement the Declaration on the Conduct of Parties in the East Sea, step up the negotiation on a substantive and effective Code of Conduct in the waters, comply with international law, especially the 1982 United Nations Convention on the Law of the Sea (UNCLOS), and ensure security, safety, and freedom of navigation and overflight.

For his part, State Councillor and Foreign Minister Wang affirmed that the Chinese Party, State, and people attach great importance to the friendly neighbourliness and comprehensive cooperation with their Vietnamese counterparts.

He thanked Vietnam for supporting and assisting China since COVID-19 first broke out, stressing that China is ready to continue helping Vietnam in the current period as it considers the difficulties facing Vietnam as its own.

He expressed support for PM Chinh’s opinions about the orientations and measures for reinforcing the two Parties and countries’ relations.

China will effectively carry out the outcomes of the 13th meeting of the Steering Committee for Bilateral Cooperation, further intensify win-win cooperation in all fields, and seriously carry out the high-level common perceptions about the control and proper settlement of disagreements, thereby unceasingly developing the China - Vietnam comprehensive strategic cooperative partnership in a healthy and stable manner to bring practical benefits to both peoples, the Chinese official affirmed./.

Vietnam to evacuate more than 330,000 residents as typhoon Conson nears

'Like an eternal flame': Americans honor the fallen on 20th anniversary of Sept. 11